Yesterday, Facebook CEO Mark Zuckerberg announced that Donald Trump will be suspended from Facebook and Instagram indefinitely. This suspension will last for “at least the next two weeks” until the end of Trump’s time in office, but might continue beyond that point.

Zuckerberg revised his initial decision to suspend Trump from Facebook and Instagram for only 24 hours – a decision made after the outgoing President incited an aggressive mob of pro-Trump protesters to storm the US legislature on Wednesday. 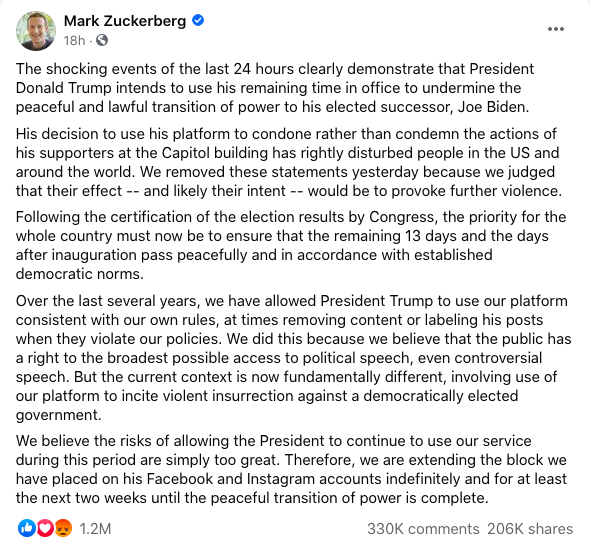 The dam is breaking.

Every social media company, every online platform, every advertiser has a choice:

Stand with Trump and the domestic terrorists who attacked the Capitol

Zuckerberg defended his delay in taking these measures, stating he has always believed that “the public has a right to the broadest possible access to political speech, even controversial speech.” Facebook had, instead, been regulating Trump’s account by “at times removing content or labelling his posts when they violate our [Facebook’s] policies.”

However, following the shocking events that occurred at the US Capitol and Trump’s encouragement of this un-democratic behaviour, Zuckerberg now believes that the risks of allowing the President to use Facebook’s service are “too great.”

Matt Navarra, social media expert, Tweeted a screenshot of Zuckerberg’s post followed by a thread of his own thoughts, offering an interesting take on the matter.

Navarra references the general consensus that Zuckerberg  “should have made this call sooner” and “not have allowed its platform to be used by Trump in the way it was,” arguing that “ALL of the platforms should have put greater restrictions on Trump’s account sooner.”

Having said that, he recognises an official ban  is “a big step to take,” and a particularly difficult and contentious one when the user is the president in a country that “rightly values and advocates democracy and free speech.”

Along with many other commentators, Navarra argues that “social networks are NOT the sole cause of many of the world’s problems” and, instead, “the way we ALL use social media is part of the problem.”

If dismantling social networks is not the solution, then what is?

Navarra’s view, which has been corroborated by many on Twitter, is that “far greater Transparency and openness by the major platforms in relation to decision making and their algorithms is needed,” as well as the existence of “greater incentives or harsher penalties” to “stimulate the right behaviours from the platforms.”

Whilst the events that unfolded on Wednesday were horrific, for many they have amplified a need for everyone to change the way they utilise social media, whilst educating themselves, and others, on how platforms operate.