Twitter, Facebook and Snapchat have locked Donald Trump out of his accounts in an attempt to prevent him from circulating misinformation and inciting violence on their platforms.

The social media giants were driven to take these unprecedented measures after protesters supporting President Trump charged into the US Capitol on Wednesday, whilst Trump took to social media to contest the election results and applaud his supporters.

Both Twitter and Facebook removed and flagged a selection of Trumps posts deemed misleading or encouraging brutality and unlawful activity. 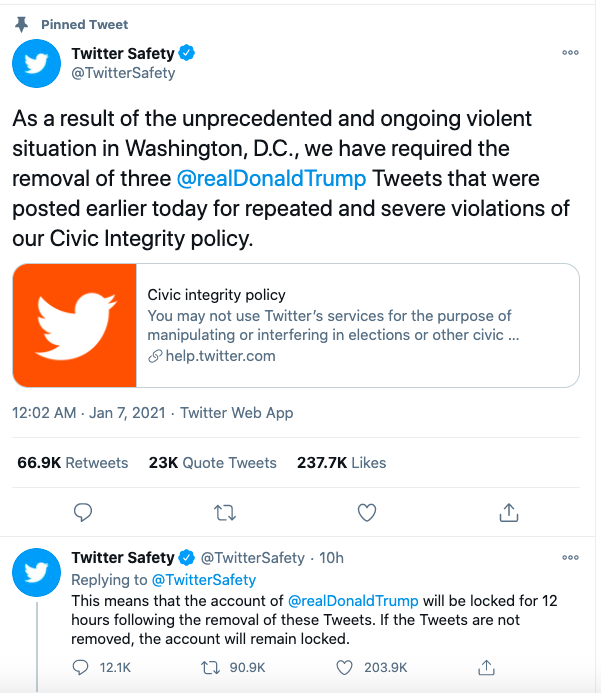 Twitter began taking actions against Trump after he posted a video praising his protestors, which the social networking service (along with Facebook and Youtube) subsequently removed. In this video Trump encouraged his supporters to “go home,” whilst conflictingly upholding the fabrications and false claims that incentivised Wednesday’s attempted revolt, labelling the election “stolen” and telling his loyal rioters, “we love you”.

Trump’s mixed messages also coloured a handful Trump’s recent Tweets, particularly one regarding the anarchy in Washington that termed the rioters “great patriots” and has since been deleted by Twitter.

Snapchat has followed in Twitter and Facebook’s footsteps – Rachel Racusen, the Director Of Communications at Snap Inc., released a statement saying “we can confirm that earlier today we locked President Trump’s Snapchat account.” This action was taken on Wednesday and the company plan to monitor the situation closely before re-evaluating its decision.

In the last 24 hours, Twitter, Facebook and Snapchat have underlined their commitment to combatting Trump’s threatening dissemination of exaggerations, provocations and lies. Let’s hope that the actions of these powerful companies will help to prevent any shocking outcomes, alike what unfolded at the US Capitol, from happening in future.