The social media giants are in competition to create the most attractive audio-chat feature, following the recent success of newbie and growing threat, Clubhouse. Twitter is now upping its game, looking to refine its Clubhouse replica, ‘Spaces’.

Twitter initially created this Spaces audio-chat feature a little too conveniently close to Clubhouse’s rise in success for it to not seem like a calculated power move. Alternatively, if these audio-chat ideas were already brewing in the Twitter headquarters, the rise of Clubhouse certainly gave them a lot more momentum. Soon after, rumours began spreading that Facebook too was sneakily building a Clubhouse clone.

Now, Twitter is working to create the optimal, seamlessly operating audio-chat feature. Inspired by user feedback, Twitter has added a range of feature upgrades for the Spaces UI, including a view of all speakers and listeners in a room, and more obvious alerts when speakers and hosts occupy a Space. 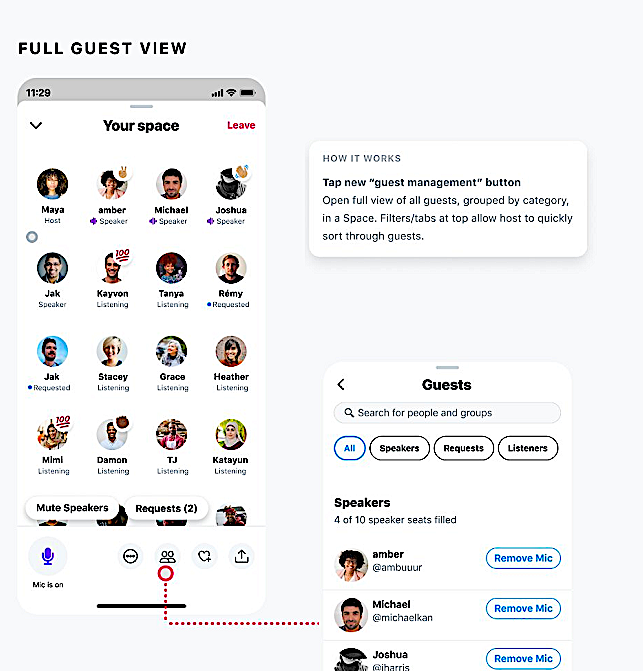 The full guest view is a key improvement – currently, when you’re in a Twitter Space, you can see the number of attendees, but not a full breakdown of who, exactly, is tuning in.

As shown in the above image, speaker and hosts will soon have the option to select ‘guest management’ to view a list of those present in the Space. The option has separate tabs for ‘Speakers’, ‘Requests’ (those looking to enter the discussion), and ‘Listeners’. Listeners will also be able to access a similar list, though only separated into ‘Speakers’ and ‘Listeners’, and on a single tab.

How the list will be ordered is still under deliberation – Twitter is considering whether it should put high-profile users at the top, or whether this could intimidate users and alter the flow or tone of conversation.

Displaying Speakers or Hosts Within a Space

Twitter is also developing a better way to broadcast when speakers and hosts are within a Space, both in the main app and within the Spaces UI. The platform has decided to implement a new Stories ring colour feature, which appears when a user you follow is speaking in or hosting a Space. 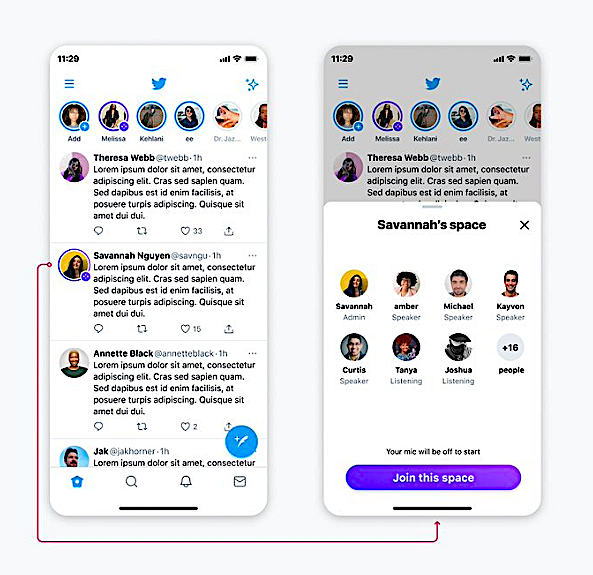 Twitter’s Spaces feature has already been received positively and its audiences are rapidly growing. Plus, when it comes to competing with Clubhouse, Twitter’s pre-established user base and non-exclusive nature give it the upper hand.

Adding these features is a form of fine-tuning that can only give it more of an advantage. It seems Twitter could successfully snatch users away from Clubhouse’s increasingly popular territory, keeping them firmly in its very own, perfectly crafted Spaces.

Next Post (n) Dating Apps - Cupid or a Curse?