Get Commissioned, Personalised Videos From Your Favourite TikTokers

TikTok appears to be testing a new feature ‘Shoutouts’ – described as an in-house Cameo competitor – that allows users to pay for personalised videos from their favourite creators.

Information surrounding the new feature was leaked by Fabian Ouwehand, the cofounder of Amsterdam-based TikToker management company Many. He described how users will be able to “request birthday wishes, pep talks and other messages” from the biggest TikTok stars.

How Will Shoutouts Work?

Creators with access to the feature will have a slim red button appear on videos they’ve made. Located above eligible creators’ usernames will be a button directing users to their ‘Shoutouts’ order page.

On this order page, the process follows the below steps: 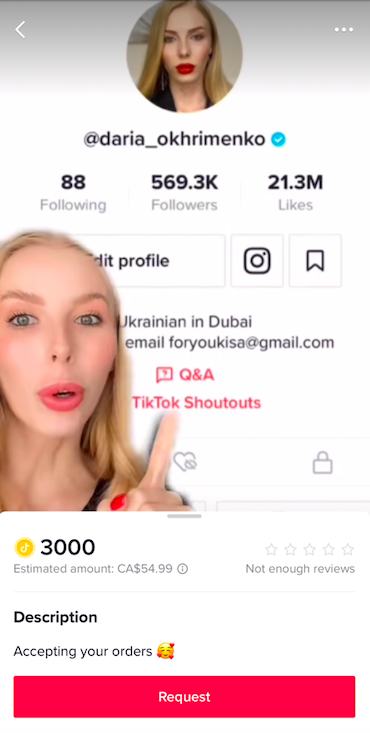 ‘Shoutouts’ could be a smart move for TikTok, particularly considering the success of Cameo (recently valued at $1 billion) and the range of other services that allow people to get commissioned videos from their celebrity idols. It seems highly likely that a Charlie D’Amelio or Addison Rae devotee would push the boat out to get a personalised Happy Birthday clip.

It’s also likely that TikTok will take a cut from – yet another – monetisation feature that builds a lucrative eco-system for creators, in turn creating a new source of revenue for themselves.