Influencer marketing is nothing especially new. Brands have been paying celebrities to promote their products for years. With the development of social media more and more celebrities have collaborated with brands on large product releases which offer both big profits for celebrities and eyes towards a brand’s products. This dynamic then developed to become a hub for micro-celebrities and social media stars engaging in these deals.

With TikTok gaining popularity and its ability to make videos go viral, many users took to the app to try their hand at becoming TikTok stars. Many users have found fame on the app gaining large audiences for often relatively small amounts of content. Becoming an influencer in our current world opens a lot of doors. This can help individuals get invited to press events to meet other influencers and enjoy the perks of said events. Depending on what industry they create content for, influencers may be sent items to try free of charge in the hopes that they will enjoy the product and share it with their audience without the company having to pay them. For influencers who may just be starting out on their journey, these types of partnerships may be beneficial as they provide both free products for them as well as solidify their role as brand ambassadors.

A benefit to using influencer marketing for brands is that it can be very cheap. Aside from sending influencers products which is a very cost-effective marketing scheme, brands are also easily able to work with micro-influencers for reasonably small fees. As this is still a relatively new method of earning money many influencers will charge a lot less than traditional celebrities may which can mean that brands could use multiple micro-influencers and therefore reach a larger audience.

Another draw of micro-influencers to brands is their loyal customer bases. Unlike traditional celebrities who may have audiences who are simply following them to keep up with their lives. Micro-influencers’ audiences follow them because they usually value their opinion and appreciate their aesthetics so therefore when they recommend certain products their audience is more likely to listen to them. Brands who have not created TikTok accounts are able to easily access their audiences through these influencers. The effort of developing an account with a range of content and a consistent follower basis is immense and so utlising influencers who reflect your brand well is an easy shortcut to success.

For a lot of brands who have traditionally relied on traditional marketing, the world of TikTok may be confusing. Adjusting to the type content which is present on the app can be hard and brands can often fall at the first hurdle when trying to understand the nuances of the app. In this regard working with influencers can be a great way to approach the app without spending large budgets on in house TikTok experts to create their content. On the other side influencer marketing is a great choice for Gen Z audiences who have a knowledge of social media. Even for small influencers the fees they can charge are rarely questioned by brands as there is no set price for these brand deals. This can mean that they can earn large amounts for posts which could require relatively little time and effort to produce. From my experience, a number of influencers have full-time jobs and do social media as a side gig. This Is an attractive prospect as these people may enjoy content creation anyway or may not have entered into TikTok to pursue it as a career but the benefits it delivers outweigh the costs. Influencers also don’t have to post a certain number of times a week to become popular. The algorithm values how many people have interacted with the post rather than how many times the user has posted.For those working in social media, having an active TikTok account with followers who engage frequently is a big plus as it shows that you have the ability to manage an online community in a creative way.

As social media algorithms are favouring video content more and more it is important that brands pay attention to TikTok marketing and take advantage of the slue of influencers with lots of knowledge and low feed to help to create content for them. 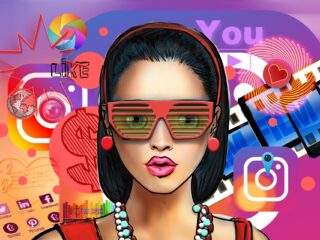