Instagram continues to make changes to its interface in order to boost engagement. The latest of these changes has been the development of a new Stories feature called ‘Stop Motion’, which will enable users to create videos based on captured images. Video content continues to be the most successful format on social networks, so it makes sense for Instagram to want to offer this feature. The stop-motion capabilities open up many possibilities for marketers, specially given how simple it will be to create content
(see below).

In addition, Instagram will also be introducing ads within the explore feed. Explore can be thought of as a discovery page where users regularly go to see content that may be related to their interests and from accounts they may not be following already.

The explore page can act as a way to help businesses gain more visibility, which is no surprise Instagram decided to introduce ads within this feed. In their latest announcement, Instagram’s Business Team explained that ads in the Explore feed are the perfect opportunity for advertisers “to be part of what’s culturally relevant and trending while reaching new audiences who are looking to discover something new.”

Instagram has said that after tapping on a photo or video in the Explore page, users may start seeing ads “as part of their browsing experience just like in the main feed”. According to the social media giant, users will “have control over the ads they see”, having the ability to hide or report an ad. The feature will be rolling out within the next couple of months.

Twitter Will Label Violating Tweets From Trump And Other World Leaders

First announced in March, the social media giant has finally confirmed their plans of using a warning label to identify “controversial content or behavior”.

In an attempt to “protect the health of the public conversation,” Twitter will be placing disclaimers on tweets from President Donald Trump and other world leaders who violate community guidelines. This was announced in a blogpost last week where Twitter admitted to having turned a blind eye in the past, allowing “certain Tweets that violated [their] rules to remain on Twitter because they were in the public’s interest”.

According to Twitter, the goal of the new feature is to “strike the right balance between enabling free expression, fostering accountability, and reducing the potential harm caused by these Tweets.”

How will this feature work? As explained by Twitter; they will “place a notice – a screen you have to click or tap through before you see the Tweet – to provide additional context and clarity”, allowing users to decide whether they’d like to see the content of the Tweets. As you can see in the example below, this new label will state that despite the tweet violating Twitter’s rules they have chosen not to remove it. 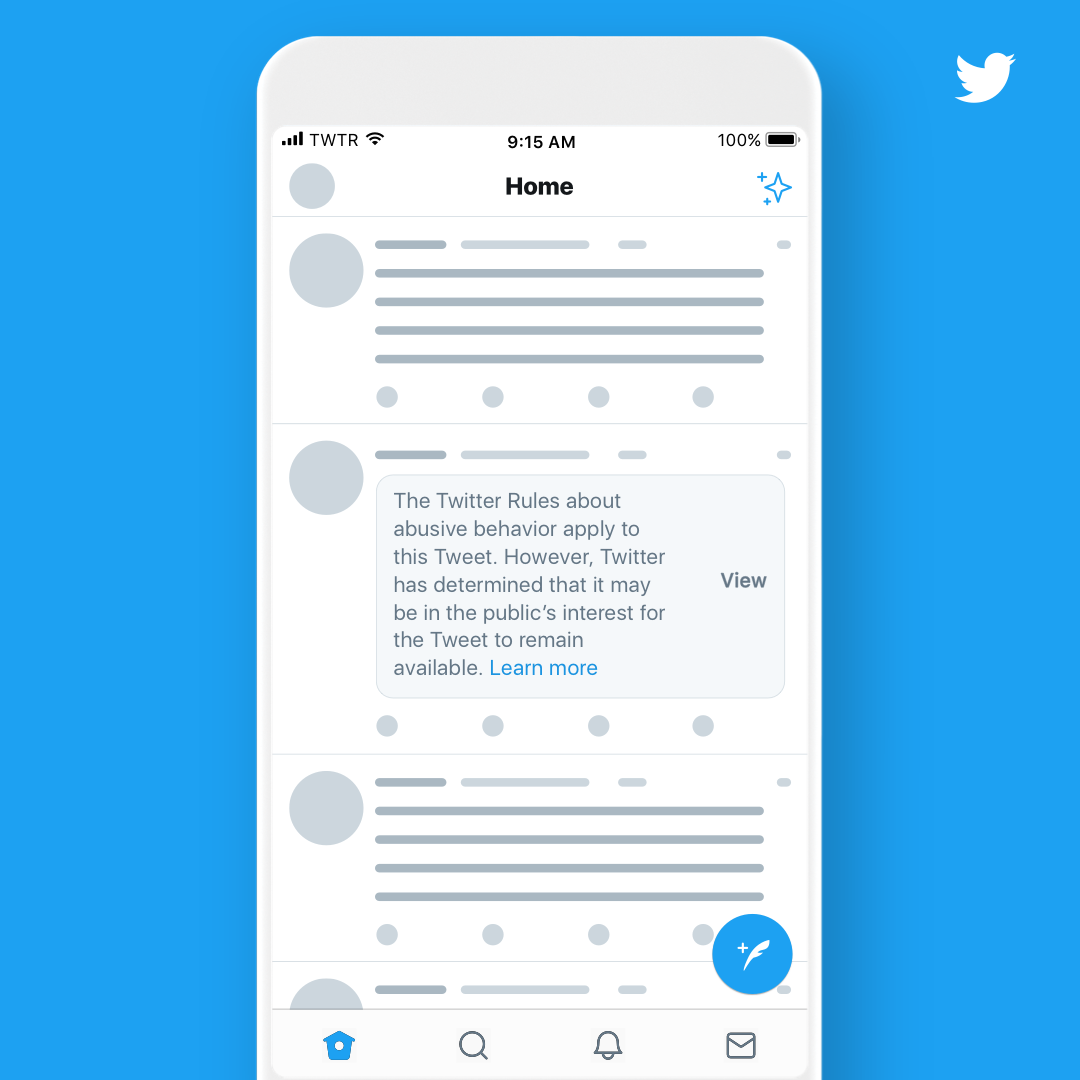 Over the last couple of years Facebook has had to face mounting scrutiny over its content decisions and enforcements. As a result, the social network has been working towards making its platform safer and more private. Back in January, the company announced its plans to build a new, independent content review board which would provide a framework for platform posting regulations as well as a new way for users to appeal those decisions.

After months of back and forth, Facebook has finally released a draft charter. There are three key points of emphasis for this new board; independence, since “the board will need a strong foundation for its decision-making, a set of higher-order principles – informed by free expression and international human rights law – that it can refer to when prioritizing values like safety and voice, privacy and equality”, selection, seeing as “the board may need to consult experts with specific cultural knowledge, technical expertise and an understanding of content moderation”, and diversity; for the board will need to be “as diverse as the many people on Facebook and Instagram”.

Facebook needs to cede some of its power to outsiders and this is a good starting point. At best, it will solve the bigger picture, but if anything it can serve as inspiration for similar organisations.

YouTube is finally giving users more control over the videos they get recommended.
The video platform announced last week that it will start giving greater control over what content pops up on someone’s homepage, as well as their Up Next videos section.

In order to do so, YouTube will be making three important changes to its recommendation algorithm. All of which have been long overdue. Firstly, users will be able to explore topics and related videos if they scroll up on the homepage and when browsing Up Next videos. Meaning that if you are a videographer/photographer, you might find a “photography” topic. According to Youtube these options will be based on existing personalised suggestions, but may also be related to the videos users are currently watching/ similar videos published by that channel. The second change is that YouTube will be letting users remove suggestions for channels they have no interest in by clicking “Don’t recommend channel.” Lastly, suggested videos will now feature in a small box along with an explanation as to why said video is being shown/ suggested.