Snapchat – the ephemeral messaging app and now go-to social platform for Gen Z – published its latest performance update, revealing a surge in in both usage and revenue throughout Q1 2021.

This notable increase is bound to catch the attention of social media marketers, the app becoming an increasingly fertile ground for advertising and driving revenue for brands.

Snapchat is hitting big numbers; it is now used by 280 million people every day, a 22% increase in year-over-year performance, and the app’s biggest rise in its YoY usage growth in over 3 years. 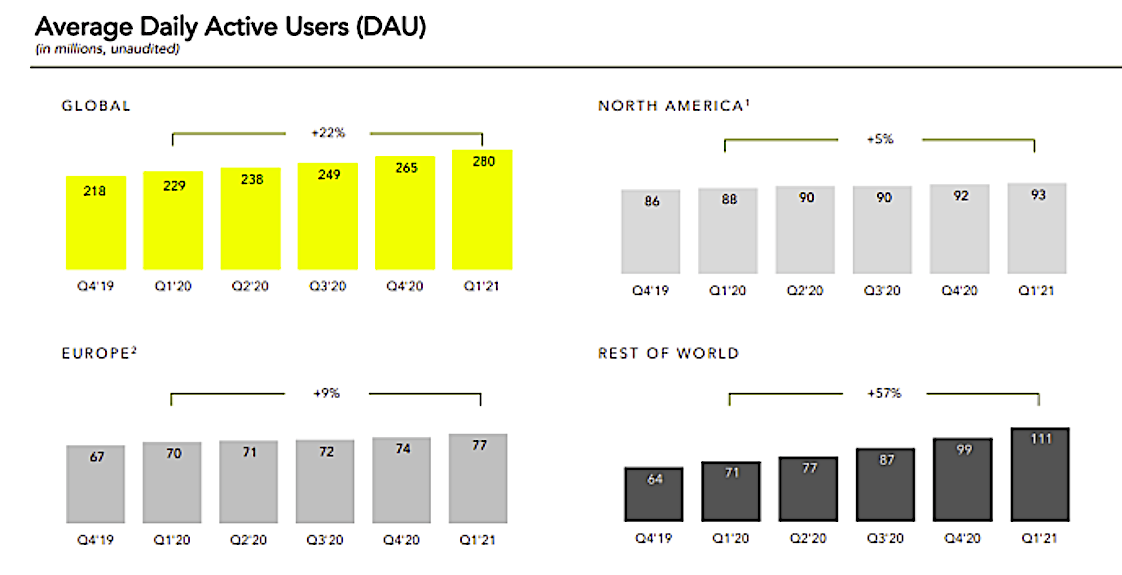 Snapchat has seen a steady rise in usage across multiple geographical locations, the standout being the ‘Rest of World’ category. This growth is likely down to the company’s investment in more localised content and improved language support options.

‘Spotlight,’ Snapchat’s TikTok-like feature, has also taken off. The short-form video feed is not only entertaining, but lucrative, providing cash incentives – up to $1 million per day – for the hottest, most popular Spotlight shorts.

Snapchat revealed, “In March, over 125 million Snapchatters used Spotlight, our newest platform surfacing the most entertaining Snaps from our community. We launched Spotlight in three new countries – India, Mexico, and Brazil – making it live in a total of 14 countries.” TikTok, watch out.

The company started in 2011, arguably revolutionising social media by providing a new, mobile-first direction. In 2021, a decade later, if you asked a Gen Z user “what’s your favourite social platform?”, chances are that Snapchat would be up there. It now not only allows users to send secret messages, but flex their best life on Stories, organise events and create imaginative ‘Spotlight’ video content.

These recent findings and advancements place Snapchat in a powerful position. What’s next for the flourishing social media messaging app?

Next Post (n) NFTs: What Are They and What's All the Fuss About?