Does Facebook Show a “Disregard for User Privacy” or is Apple Evolving “At the Expense of Small Businesses?”

Facebook contends that Apple’s iPhone software changes around data gathering and targeted advertising will adversely affect small businesses. The changes at issue are those brought about by Apple’s new feature, ‘App Tracking Transparency,’ which implements an opt-in/opt-out option for users when it comes to sharing their data. 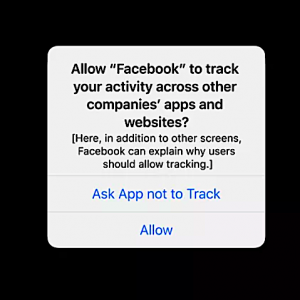 This dispute is between two of the most successful, large-scale tech companies in the world, so in what way are small businesses entangled in it? The rationale behind Facebook’s allegation is that Apple’s new iOS 14 operating system will curb the ability of companies, like itself, to gather data about users and utilise it for targeted advertisements. Facebook argues that this shift will have a devastating knock-on effect and damage the multifarious small businesses that use Facebook’s advertising services to drive sales.

Facebook clarifies, “While limiting how personalised ads can be used does impact larger companies like us, these changes will be devastating to small businesses.”

Facebook publicised its reproach in a series of newspaper ads with the headline “We’re standing up to Apple for small businesses everywhere,” which were posted on Wednesday in the New York Times, Wall Street Journal and Washington Post. Using the emotive headline, Facebook framed itself as a noble protector of these small businesses, particularly those that have been chewed up and spat out by the pandemic. 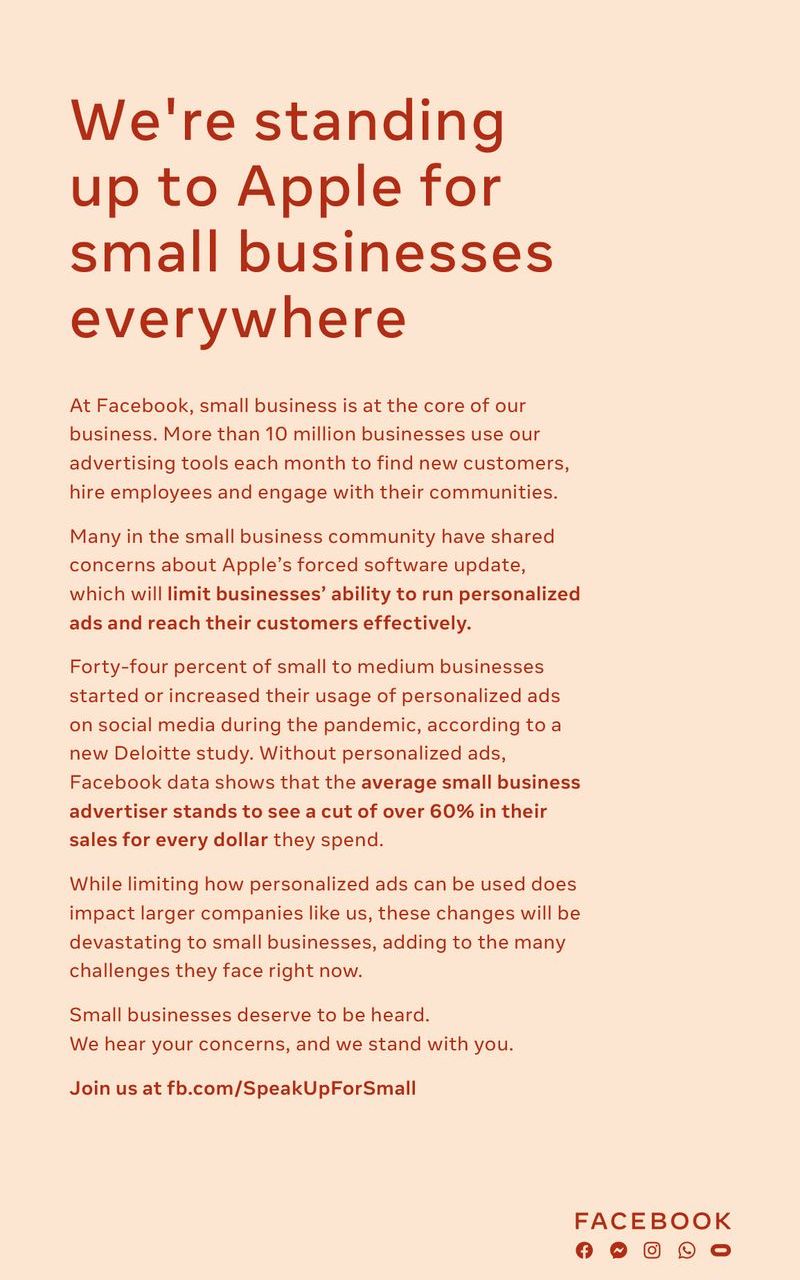 Facebook furthered its argument, alleging that Apple is evolving in a way that will not only damage small businesses but is highly self-serving. On Wednesday Facebook VP of ads and business products, Dan Levy, disclosed that the company is working with Epic Games in its antitrust lawsuit against Apple, accusing the App Store of using its monopoly power at the expense of app developers.

Levy stated, “Apple is behaving anti-competitively by using their control of the App Store to benefit their bottom line at the expense of creators and small businesses.”

And where does Apple stand on the matter? Apple’s arguments against Facebook are centred around users’ data and privacy protection. Apple claims that the changes made under the ‘App Tracking Transparency’ feature were “standing up” to users of its devices and accused Facebook of showing a “disregard for user privacy.”

In full, Apple wrote, “Facebook executives have made clear their intent is to collect as much data as possible across both first and third party products to develop and monetise detailed profiles of their users, and this disregard for user privacy continues to expand to include more of their products.”

Facebook speedily retaliated, stating that Apple was using its “dominant market position to self-preference their own data collection while making it nearly impossible for their competitors to use the same data. They claim it’s about privacy, but it’s about profit.”

So, is Facebook showing a “disregard for user privacy” or is Apple evolving “at the expense of small businesses?” You can decide what you think. However, despite it all, Apple still plans to go ahead with the changes in question.