It’s all kicking off in the world of social media, this time over ephemeral features. Twitter’s ‘Fleets’ – which truly were fleeting – have officially disappeared, having had a short life-span of eight months. 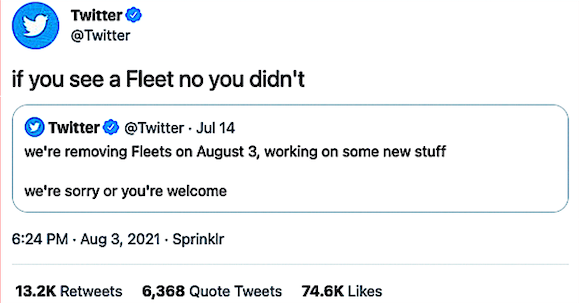 Just as Fleets vanished, TikTok posted a Tweet about its “fleeting feeling” that “Twitter is different today” – very witty from the popular short-form video app.

have this fleeting feeling that Twitter is different today

Soon after, now-confirmed rumours start spreading that TikTok is testing its very own ephemeral feature, copying Instagram’s ‘Stories’ vanishing-posts format. Suspect timing? It’s arguably a bold choice to launch an ephemeral feature, just following a high-profile failed attempt to get one off the ground.

Social media expert Matt Navarra, who initially thought it to be a hoax, tweeted:

This is going to be popular #justahunch 🔥

Stories and ephemeral messaging were, of course, originally Snapchat’s signature features – it appears to be a classic case of the largest tech platforms swiping ideas from one another.

TikTok is one of the most obvious victims; its signature short-form video format has now been copied by Instagram (‘Reels’), Snapchat (‘Spotlight’), and YouTube (‘Shorts’). Now, TikTok is getting its own back, recreating the last feature its rivals really had against it.

To clarify, it has now been confirmed (by a TikTok Spokesperson) that the app is running a small pilot test of this ephemeral feature in various countries outside the U.S. However, no details have been released on how long the pilot test will run or whether it would result in a public launch.

How Would It Work?

If you’re a social media user, you’re likely familiar with the ephemeral feature mechanic – the Stories of accounts you follow appear for 24 hours before they’re automatically deleted. TikTok ‘Stories’ will supposedly be displayed in a newly added collapsible side bar in the main feed of the app. As with Instagram and other platforms, you’ll also be able to tap on a user’s avatar to watch a Story. Users can create a new TikTok Story by tapping a “create” button that’s been added to the sidebar, and they can add the usual captions, music, and text.

What’s Are The Benefits Of This Feature?

Two obvious benefits of this feature are that it will increase engagement and maximise ad space for monetisation (for an app with current limitations when it comes to effective ad placement) .

What’s more, the feature will provide a fresh way for the TikTok community to create content. A TikTok spokesperson said in a statement to Variety:

“We’re always thinking about new ways to bring value to our community and enrich the TikTok experience. Currently we’re experimenting with ways to give creators additional formats to bring their creative ideas to life for the TikTok community.”

TikTok is on the cusp of the next stage of growth, and analysts estimate it will become the next billion-user social app by the end of this year. This new feature could certainly help the immensely powerful company get there.